Jake having a yeein’, finger flippin’, eye crossin’ moment. These moments make it challenging for Jake to tune in to another person

When someone perceives the world differently than you, how is it possible to connect?

How do you communicate with someone that does not seem to understand you? And you, in turn, do not understand him/her?

A Story about Michael

My very first teaching position was for Montgomery County MR/DD as a preschool teacher. The first couple days I was permitted to simply observe the temporary substitute teacher, and get to know the kids. As the principal walked to show me the class, she warned me with a smile “now there is one child with behavior problems in your morning class.” I entered the room as they were having morning circle time. Five year old “behavior problem” Michael stood out like a sore thumb.

The rest of the kids all sat quietly and participated in the songs and activities halfheartedly while focusing 75% of their attention on Michael. He was being gently held in his seat by a large, strong aide who was stroking his head lovingly as he screamed, cried and struggled to get up from the chair. The only time the lead teacher would gain his attention was when she picked up a bag of miniature marshmallows and started passing them out. She’d hand one to each child saying quietly “good sitting” and look at Michael saying “no, you have to sit quietly” as he reached for one. She’d pass him up, and being refused a marshmallow he thrashed and wailed even louder.

After circle time, Michael, tear-stained and red-faced, spent the rest of the day trying to climb and get into the high cupboard where the marshmallows were kept. He’d cry in distress each time the aide or teacher gently said “down” putting him back to the floor.

The intention and compassion of the teachers was clear, to everyone but Michael that is. He was seeing things from a different set of eyes. Sometimes, when an individual struggles to see things from the eyes of others, distrust and fears override the efforts on the part of either party. Someone must decide to trust and open themselves to the eyes of the other individual if a connection is going to be made.

Sometimes we seem to be trying to force people into the norms of society, when instead it might be a better strategy to change some of the norms. When a child does not conform, I often find myself respecting their strength of not being influenced by anyone more than their inner voice and desires. We often learn to stifle our passions for the sake of fitting in and being normal. The child’s reasons for not conforming often have less to do with us, yet we tend to feel pressured to help them conform more. Why? When we let that go, we can open the door to learning, enjoying each other as is, and creating new experiences together.

Fill your cup first, then give from the overflow Photo from WATER

Have you ever heard that another way to spell LOVE is “T-I-M-E”? Spending time and directing your attention towards another person is a beautiful way to say, “Hey, I’m interested in you. I care.” Sometimes we find this difficult to do when the other person is behaving in ways that we don’t understand. So then what? One way is to decide to fill your own cup first, so you won’t need anything in return from the person.

Some people have enough on their plate already, and simply cannot live up to our expectations of what would be appropriate or nice. Spending time with that person is much more relaxing and enjoyable when you are already at peace with who you are. Being aware that their response or lack of response to you is not in your control helps enormously, and frees you to shift control to YOUR responses to them.

A Story about Grandma

My grandma was a big part of my life growing up. I feel fortunate to have been able to remain close with her even through her last days on earth. As her body began to shut down with congestive heart failure and other issues, she began behaving differently too. She was no longer the sparkling, talkative grandma with a million questions for me to answer. She grew quiet. She grew very introverted. She would even doze off sometimes when I would come to visit. She found comfort having the TV on, often on the shopping channel.

Before my visits I always prepared myself to be okay with however Grandma was feeling/behaving that day. I’d come in and sit on the couch to talk to her, but her direction was mainly directed at the TV. Using what I’d learn about connecting with my son – I, too, directed my attention at the TV. Long periods of silence would go by, until occasionally Gram would kind of mumble to herself something like, “ I wouldn’t pay that price for those shoes.” I would mumble in response, “me neither, but that lady sure does make them sound worth it!” Grandma would laugh. Often a moment like this was so wonderful, because then she’d turn her face towards me, and we’d chat for a while again. Sometimes she’d even complain about her aching swollen feet and ankles that were elevated in her lounge chair. I’d take that opportunity to sit in front of her and rub them gently. Then I could talk to her about how else she was feeling. I sit only until I saw her closing off again, tilting her head back in exhaustion. Then I’d move back to the couch across the room, and wait again until she felt up to interacting.

I am thankful that my son’s condition had taught me the importance of respecting nonverbal cues. This awareness empowered me to demonstrate my love for her and enjoy those last precious moments even though her health had decreased her ability to interact with me. 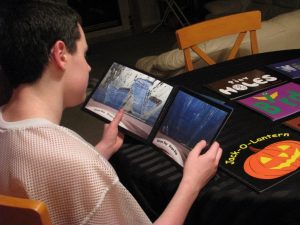 Jake often likes to just look at the pictures in silence. Silently looking with him or at my own book often results in more interaction than when I start bombarding him with questions

Offering your time and attention freely is another way of saying “I want to be with you” or “I want to get to know you” or “I want to understand how you are feeling.” This approach can help a person who has interaction difficulties to let down their protective walls. What we usually do is try to force the walls down by saying, “I need something from you” through our constant pressure on the person to interact. This can sometimes resort in the person’s use of stronger tactics to protect themselves such anger and physically acting out.

What Do The Experts Say?

First, who are the experts? Various people can have a great deal of experience in certain areas, but when it comes to an individual person… each is truly his/her own best expert. We may influence greatly with our words, actions, and time spent with them, but if we do not respect their uniqueness we may not. Parents, please, do NOT listen to anyone so called “expert” who tries to diminish you, your child, or what you want to believe for your child.

Parents are the child’s life-long advocates. Seek support that empowers you if your child has significant challenges interacting or otherwise. Links to the Son-Rise Program, Ten Things Autism, Communicating Partners, and Special Solutions can all be found on the Resources page. Here you will find a wide range of resources to learn more about how to respectfully connect with children no matter how significant the challenges.

Learn From a Child

Most very young children naturally engage in what is known as parallel play. This is when two or more children participate in an activity next to each other, but do not appear to be interacting. They instinctually do this, not realizing all they are learning by doing so. Connecting with another person in this way is powerful for adults as well. It can create new levels of relating with even the most challenged individual.

Autonomy is the goal of child development. Heck, we adults are constantly working on it too! Learning to operate in these bodies and in this world is a process of a lifetime. Respecting and deciding to trust each other as a uniquely created person with something wonderful to offer the world offers amazing benefits for everyone.

Remember the child screaming for marshmallows? As the class was turned over to me, not having any training in “special ed” yet, I decided to go with what I learned from my child development courses – support his autonomy. I instructed my two aides that we were just going to leave him alone during circle time. They looked at me as if I were nuts. I got rid of the marshmallows, and told one of the aides to only attend to Michael if absolutely necessary for safety purposes.

His response was amazing. At first he ran around the room at top speed, giggling and laughing hysterically at his new, deeply desired freedom during that horrific (probably to him) circle time. Then, he got out the playdough, his favorite thing usually put away at this time. He sat at the table across the room with it. As our class sang, played games, read stories –Michael would often watch and even participate from across the room! We always had an open cubby chair for him to come join us. Sometimes he would tease us by coming over and sitting for a teensy millisecond, then quickly run back to his playdough table. That child gave me the most beautiful gift of showing me that children with challenges do not want to be pushed around anymore than the rest of us do. They have their reasons for their behaviors. We may not understand at all times, but we can learn by deciding to trust rather than fear the unknown. We can then reach out a hand from our own inner source of peace to encourage that child to receive what we want to offer them as well.